An Astrid Lindgren story that I vaguely recall

“Speak American when you’re in America!” That’s what my grandparents told my mom when she asked why they didn’t speak Romanian with her. They probably responded in heavily accented English, at least I recall my grandfather’s English as being odd. I was six when he died, and found other things about him odd besides his English. For instance, that he was missing two fingers. I later learned that he had lost them in a workplace accident, but when I was six, I assumed that old men lost fingers like they lost hair. And spoke odd English.

My grandparents didn’t talk about the old country. Never ever. In fact, my grandfather’s sister even denied being an immigrant. When, as a curious teenager, I asked her about the old country and my heritage, she replied, “I’m American. I’ve never lived anywhere else,” and pressed her lips together. Those lips were sealed so tightly that no information about immigration could have leaked out, not even if I had pried. And I did pry by waving a copy of immigration papers in front of her that said that her family had entered the US in 1918.

Now it is 2015, and I find myself in a similar situation. My situation is re-integration to the US after 40 years in Sweden, a kind of reverse immigration. I planned my departure from Sweden well in advance, and had set into action the gigantic, squeaking, grinding bureaucratic wheels of the Swedish and American governments; the tax boards and social security systems of both countries and the educational and banking systems of both countries. I would like to give you a list of the things I had to do, but the list was so mind boggling that, as I worked my way through the items on it, I forgot them. Instead of ticking boxes on a check list, my mind obliterated them one by one. This could be the on start of Alzheimer’s, but I suspect it is a natural form of survival. My brain is saying, “don’t waste energy looking back. Move onward. Look forward.”

Americans ask me about life in Sweden, and after less than nine months in the US, I can’t remember much about those 40 years. Instead of providing a personalized reply about my individual and unique experiences in that country, I fry svenska köttbullar and bake lussekatter, and if I had a folkdräkt, I would probably put it on and dance a schottis. I have become an IKEA sales poster. I can’t help it. It’s the easiest way out. The past nine months I have worked diligently on re-integration and survival in my new country. Instead of looking at my life at large through binoculars, I have focused on the minutely detailed tasks of re-integration through a microscope.  Microscopic vision has paid off. I now have an American teaching credential, American references, an American credit score, American bills to pay, and American friends to hang out with.

I don’t think I will deny re-integration to the US when and if any grandchildren ask me about it. But, I wonder. Will I reply, “oh yes, I once worked in Sweden,” and serve a platter of svenska köttbullar with lingonberry jam and leave it at that? Juxtaposed with planting permanent roots deep in US soil today, those 40 years in Sweden seem distant and long ago. Ephemeral. Like an Astrid Lindgren story that I vaguely recall, instead of something that has actually happened.

Posted by Deborah Fronko at 6:38 PM No comments:


When I saw the blue lights flashing, I pulled over. There was no other car on the street, so I knew the cop was after me. I rolled down my car window as the officer approached, and before he could say anything, I said, “Officer, I’m lost”.

I had visited Swedish-American friends in West Hollywood; the dynamic duo Anna and Michael who run Demon Theater. This is the theatrical company that stages Ingmar Bergman plays in English at the Lee Strasberg Theater in West Hollywood in the winter, and in Swedish during Bergman Week on the island of Fårö in the summer.  On my way home from West Hollywood, I ended up in East LA. I got on the freeway again, but repeated the same mistake and ended up on the same street in East LA for the second time.

Perhaps the cop had seen me the first time around.

The officer didn’t ask to see my brand new California drivers license, or ask to see my registration and proof of insurance, the law in California. Instead he asked, “where do you want to go?” I told him I wanted to go east. He thought for a minute then said, “turn left at the light here, cross the next intersection and after that take the 5 North on the right, from there you’ll find a junction heading east”.

I thanked him, and he returned to his patrol car. When I got home I told my family about how friendly the LAPD is in East LA. And their reaction made me stop and think. They asked why the cop had stopped me. Had I run a red light or a stop sign? Had I made an illegal U-turn? Was I speeding?

No, I wasn’t doing any of those things.

The only reason I can imagine the cop stopped me was racial profiling. That phrase normally carries a negative connotation, for instance, an African-American or Hispanic motorist driving in a predominantly middle-class neighborhood might be stopped by the police. The reason they are stopped is not because they broke any road traffic law, but because they are viewed as suspicious, alien characters in that particular neighborhood.

I suspect that when the cop saw me; a middle-aged white lady in her characteristic middle-class Toyota Camry driving in a predominately Hispanic-Latino neighborhood, he figured I was lost. In that case, I don't mind racial profiling; he helped me find my way home.

My aunt was more blunt and politically incorrect in her profiling of the citizens of East LA. But that's the way my aunt is. She's the human female equivalent of Homer Simpson. She said, "he wasn't being nice. He just wanted to save time. If he got you out of the neighborhood before dark, he wouldn't have to investigate your murder after dark".


“There may be side effects. Call me if they persist,” the doctor said as she wrote a prescription. After I moved to California I developed high blood pressure. This is not surprising. The last four months have been spent in stressful negotiations with Skatteverket, Pensionsmydigheten, Medi-Cal and other government agencies on both sides of the Atlantic. In Swedish. In English. And around the clock. Insomnia has become a persistent pest because of late night calls to Swedish agencies. I grind my teeth every time the handling officer I need to talk to isn’t at their desk when I call, and the operator in Sweden says, “Could you call back in two hours?” Two hours from 1 am is 3 am in California.

I noticed that my doctor was highly pregnant.

“When are you due?” I asked, wondering how long she would be working before taking maternity leave.

“In two weeks,” she replied.

“And how long will you be on maternity leave?” I asked, still trying to understand the logistics of calling her after testing the medication for a month or so.

“Twelve weeks,” she replied and smiled, “I come from El Salvador, and it also has twelve weeks with 75% pay.”

Is the US on the same level as a third world country like El Salvador? I asked myself. Although, kudos to California. At least in this state a brand new mom receives a certain percentage of her salary, like in El Salvador. In most states in the US, however, if a mom wants to bond with her infant for twelve weeks, she has to do so with zero pay. I guess if you plan on having a couple of kids, you’d do better in a third world country like El Salvador than in the US. That is, unless you live in California.

As these facts swirled through my mind, an enormous sense of relief swept over me. Child bearing is not on my agenda. Been there. Done that. Did it in Sweden (paid maternity leave for 480 days). However, after my divorce and after the kids had moved out, my priorities shifted from welfare benefits and maternity leave to other issues. I was approaching retirement and didn’t want to retire to an old age in a foreign country. I wanted to be near my family. As I grew older, moving home to California shot up to the number one spot on my agenda, and things like maternity benefits slid to the bottom of the list.

Although I found it easy, even exciting, to settle in a place far from family and friends when I was young, I now agree with Mr. Mason in Downton Abbey. In Season 5 Episode 8 he says to Daisy, who is contemplating leaving Downton and moving to London, “I hate it when people who love each other must be far apart”. That is my sentiment exactly.

I discover my DNA in California

DNA works in mysterious ways. The 38 years I lived in Sweden, I kept in touch with my nuclear family and my aunts. That was easy. After all, I knew who they were before I left the US. I also kept in touch with a few first cousins. And that was easy, too, because I knew who they were; they were the kids sprung from the loins of my aunts. Over the period of 38 years, my family grew. I had babies and my first cousins had babies. We exchanged photo Christmas cards once a year; glossy likenesses of progeny who grew increasingly taller and increasingly less cute year by year. I write “less cute” because at some point we quit sending those cards, and I assume it’s because our progeny had turned into adults; young men with smug expressions and facial hair and young women with pouty expressions and too much sex appeal for a Christmas card.

This summer, my first as a returning emigrant, I met some distant relatives; third and fourth cousins. They lived in Southern California back in the 60s and 70s when I lived here, and how we missed each other at that time can only be blamed on the absence of ancestry.com. I guess that website is responsible for our reunion.

It turns out that my third cousins and I have great-grandfathers who were brothers in Romania, where we have our roots. One of my third cousins is an artist. And although I am not a visual artist, I think it is generally agreed that theater, my field, belongs to the performing arts. At any rate, both my cousin and I had seen the Werner Herzog documentary Cave of Forgotten Dreams and had been inspired by the movie.

This is a horse mosaic she made in California, inspired by the cave paintings in France in that documentary. I like the way the broken surface of the mosaic represents her interpretation of the uneven surface of the Chauvet cave.

Also inspired by the movie, but in Sweden, I cut a horse stencil and spray painted the figure on an old tile that reminded me of the uneven surface of the French cave paintings.

My third cousin and I have great-grandfathers who were brothers. That much we know. What we don’t know is if we share a genetic link to the paleolithic artists in Chauvet. Or a genetic proclivity for cave painting in general. And for horses in particular.

For books written or translated by Deborah Fronko click on the image below. 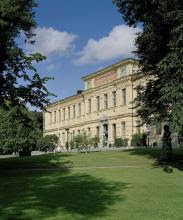 Click on the image to watch Deborah Fronko in a Swedish comedy from 2010.